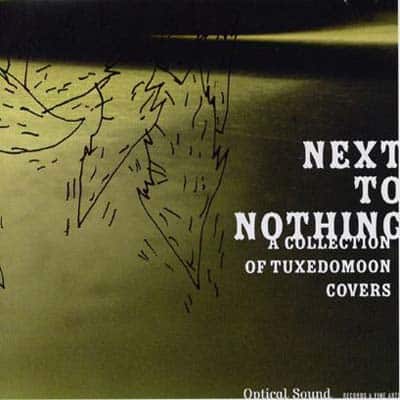 “When this record first came out on CD I played it at our parties and DJ gigs. Everyone liked it and wanted to know who it was. I liked it. I still do. Now it is available for download on Bandcamp. I recommend it highly. “
Blaine L. Reininger

Albums of covers might be even more fashionable today than they ever were. Often, one has to admit, such an exercise reveals itself as a bit pointless, more particularly when it appears as the homage of a fan expressing his allegiance or, on the opposite side of the spectrum, as the détournement of works made so unrecognizable that one comes to seriously ask oneself why and how they possibly could have marked an audience or an era.

This album, composed of covers of the legendary Tuxedomoon – a Californian group in a state of perpetual exile since the beginning of the eighties – takes a third avenue, that is the one of the references game that will accordingly be named the sarabande en bas de l’escalier avenue. The learned fan will find himself lost in a very improbable place, sort of a Gothic cathedral where the gargoyles are blinking at each other; others will recognize the sonorities of a distant melody, a part of the soundtrack of the eighties, as heard by nowadays’ ears. This approach is not exclusive of homage (as some of the artists participating to this album are indeed fans of Tuxedomoon) or détournement (the cover of “Queen Christina” by Simon Fisher Turner is a brilliant illustration), but its playful aspect brings it close to a Dada manifesto reminding of the origins of Tuxedomoon.