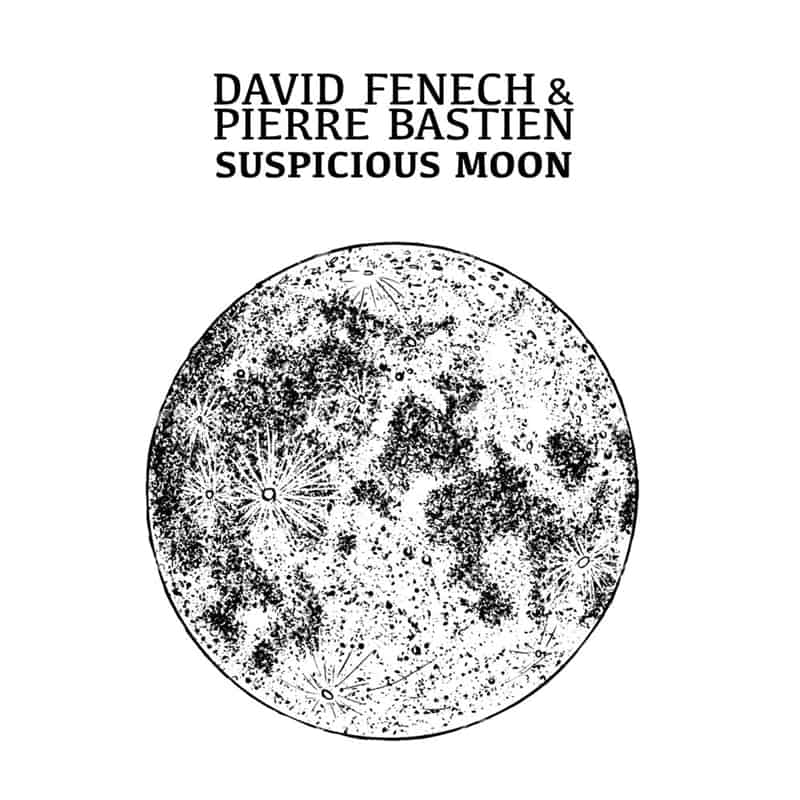 The idea of “Suspicious Moon” started at a party around the topic of blue color. David Fenech had chosen to play “Blue Moon” and Pierre Bastien asked to join in. It was a very enjoyable party and then they recorded the song and decided to plan an album exclusively based on covers of the King. Not that we were absolute fans of Elvis… but as a starting point to go somewhere else. And this is what we reached: in many aspects a premiere for the two musicians. Pierre focuses on (prepared) trumpet for the very first time, while David is heard extensively as a vocalist and is more than ever responsible for all arrangements and textures.

Playing other people’s material is also a premiere for both of them. 11 tracks around very well known standards. Like familiar places that are changed when seen in a different light. Please enjoy.

“Our choice of the Elvis Presley song book for this record may seem strange to many. It seems strange to me as well. Not that I dislike the original music, but before our sessions it had never been a direct source of inspiration. Paradoxically, this distance gave me freedom and flowing ideas. I hear similar qualities in David’s parts too. We hope that our relaxed attitude and its positive outcome will be reflected in this album” – Pierre Bastien

“The strange thing about these recordings is that the creative process was so fluid and natural… that it seems that through playing other people’s music, we almost reveal something of ourselves. As if these tracks were our creation, as if they were our own children!” – David Fenech

Pierre Bastien (born in 1953) is a French musician who builds his own machineries, at the cross between music and visual art, that blends live trumpet sounds with screen projections of on-site, mechanical sound sculptures in a very poetic way. His work is described as “a timeless sounding orchestra, both futuristic and slightly dada, conjuring ancient traditions in its surprisingly sensuous music.”. Around 1986 he started participating in Pascal Comelade’s Bel Canto Orquesta. At the same time he created – and literally built – his own orchestra called Mecanium : an ensemble of musical automatons constructed from meccano parts and activated by electro-motors, that are playing on acoustic instruments from all over the world. Collaborating in the past with video artist Pierrick Sorin, fashion designer Issey Miyake, singer and composer Robert Wyatt and Aphex Twin (who released three of his albums on his label Rephlex) to name a few, he is one of the most influential experimental musicians working in the field. In 1986 he formed his own self made one man orchestra, Mecanium and made over 20 records over the years. “A mad musical scientist with a celebrity following” (The Guardian ). 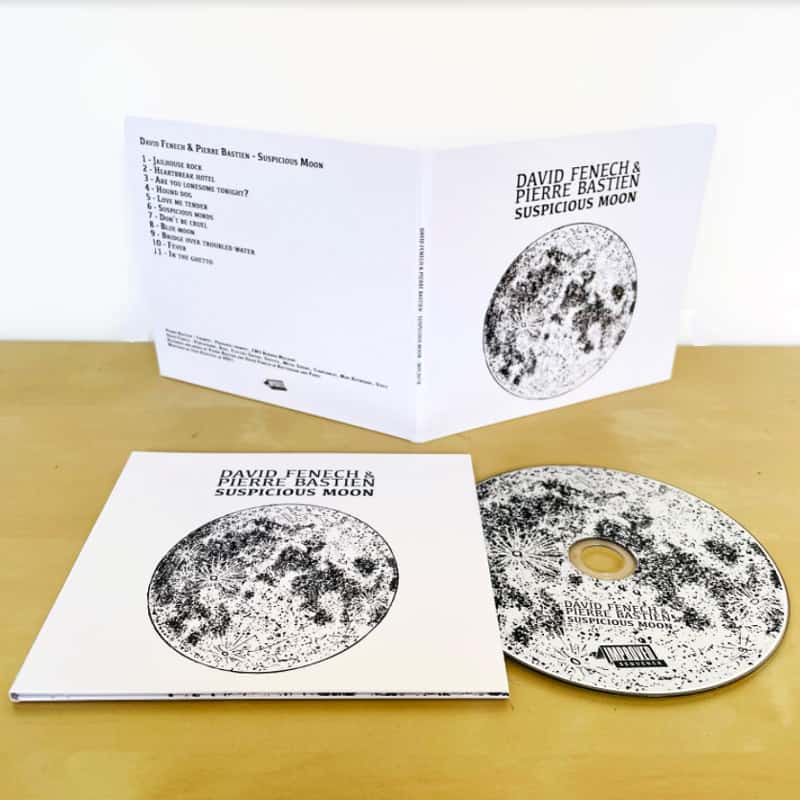 Unexpected and lokey brilliant Elvis covers from french troubadour David Fenech and cult instrument builder and composer Pierre Bastien. As you might expect from the names involved, their take on Elvis is radically oblique and serves to reset the coiffed rock ’n roll god’s legacy in a much smokier, Gallic light. As that implies, the songs are relatively straight-played – they’re not taking the piss – but completely drained of hip-thrust and Brylcreem and replaced in a starker, noirish mise-en-scene, limned by Pierre Bastien’s unusual but excellent use of prepared trumpet, and given shape and texture by Fenech’s arrangements, which relate as much to his work with avant crooner Ghédalia Tazartès as they do to a sequin-clad Presley. Trust that, beyond some avant working men’s club in Durham or David Lynch’s most fetid fantasies, you’ve never heard Elvis songs quite like this before. Drawing for the biggest hits, Fenech & Bastien exert singular spin on the originals, variously morphing ‘Fever’ into an experimental jazz club hush, and reducing ‘Jailhouse Rock’ to creepy vapours and bass thrum, while adapting the feel of ‘Are You Lonesome Tonight’ to something like a music box lullaby, and dialling down ‘Love Me Tender’ to its barest essence of heart-broken blues, while centrepiece ’Suspicious Minds’ is wholly transported Eastwards to recall a fantasy jam between CS + Kreme and Coil in a Bangkok jazz bar where daylight does not penetrate. Og and then there’s that water-boarded version of ‘Bridge over Troubled Water’, with Bastien bleating his trumpet into a bucket of water. Quiet simply it’s a hugely enjoyable and charming album, certain to strike with fans of everyone from Lewis to Suicide, Nurse With Wound to The Caretaker and beyond.

Elvis Presley was many things: rock n roll luminary, Hollywood workhorse, peanut butter and banana sandwich maven. But rarely, if ever, is The King considered avant-garde. His music, movies and moves may have been rebellious at the outset, but it’s hard to deny that Elvis was entrenched in the mainstream for the whole of his career. This spring though, a pair of open-minded French musicians, David Fenech & Pierre Bastien, bring The King into uncharted, and decidedly more esoteric, cultural territory: the 21st-century noise-rock underground. Elvis swiveling around on bespoke Bandcamp pages and on limited white-label LP pressings — whoda thunk?

Suspicious Moon is Fenech and Bastien’s new album of purposefully experimental Elvis covers, released a couple of weeks ago by Italian record label Improved Sequence. The record draws its mash-up title from a collision of two of Presley’s most iconic hits; musically, too, Suspicious Moon uses Elvis’s music equally as a source of chaos. The title tracks in particular—“Suspicious Minds” and “Blue Moon”—toss around the songs’ raw parts with nothing to lose.

Using Presley as a jumping point for musical experiments was something that even Fenech and Bastien themselves didn’t anticipate until a chance meeting at a Parisian salon. The pair, who have quite a pedigree as performers and composers of their original work, describe their first impromptu performance of “Blue Moon” originating from a house party, themed around the color blue. Fenech began playing “Blue Moon” on a whim, and Bastien simply came along for the ride. In a statement accompanying the record’s release, Bastien elaborates on Suspicious Moon’s overall aims (or, really, lack thereof):

“Our choice of the Elvis Presley song book for this record may seem strange to many. It seems strange to me as well. Not that I dislike the original music, but before our sessions it had never been a direct source of inspiration. Paradoxically, this distance gave me freedom and flowing ideas. I hear similar qualities in David’s parts too. We hope that our relaxed attitude and its positive outcome will be reflected in this album.”

There’s nothing traditional about Suspicious Moon — the stunt of it all is the record’s prevailing through-line. Among the eleven cuts, “In the Ghetto” is the selection that coheres into something properly profound in its own right. But poke around the whole of Suspicious Moon and you’ll find Fenech and Bastien reveling in the outlandishness of their concept, bringing The King to unexpected and trippy extremes throughout. 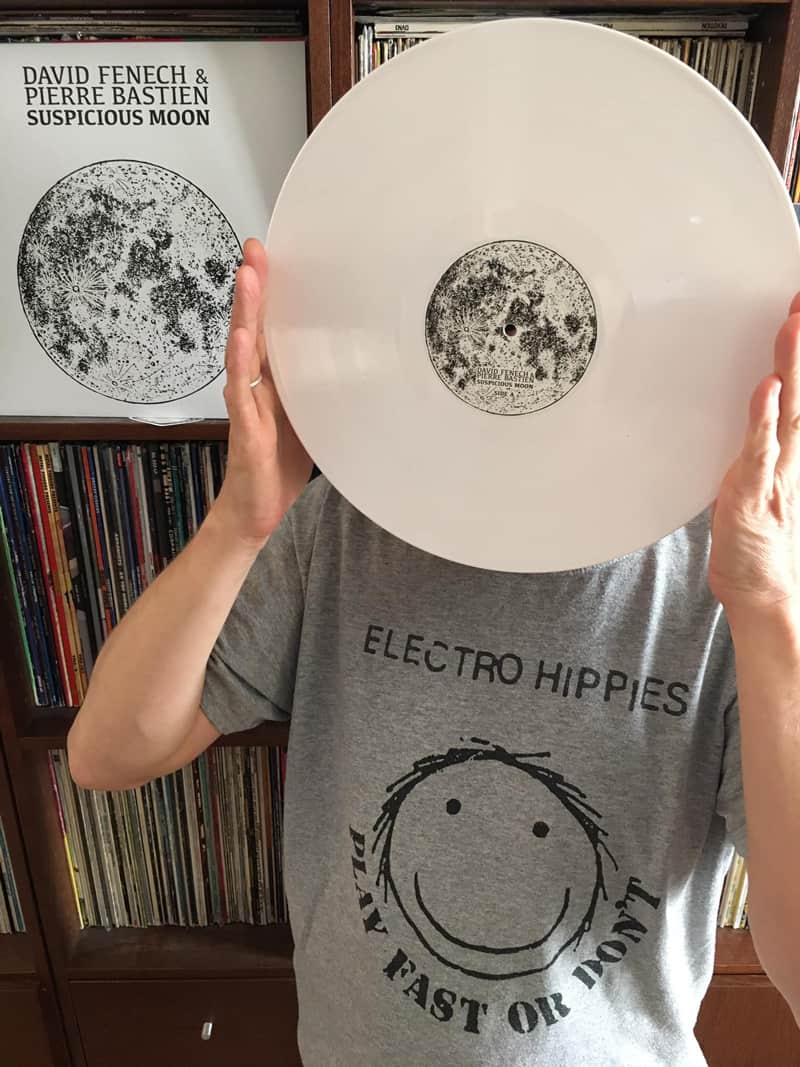